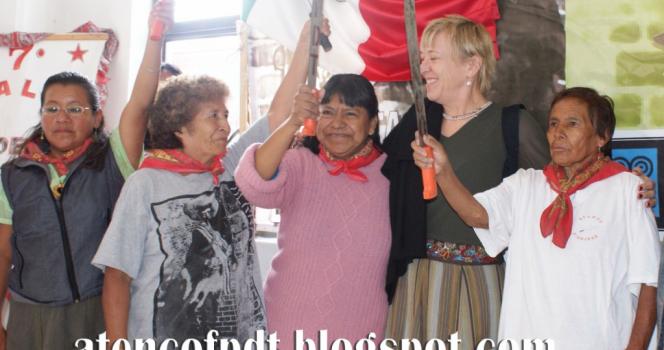 Furthering our solidarity with the people of Atenco over the past two years, JASS, the Nobel Women’s Initiative, and Mexican allies brought Laureate Jody Williams to San Salvador Atenco on September 8 to support women struggling for voice and land rights, and to pressure the Mexican government to halt repression and fulfill its promises. Jody Williams speaks from the frontlines.

The women — I don’t even know what to say. Strong, defiant, so sad because of the 12 political prisoners. They called me from prison. They sent me a letter. Here is one paragraph:

[When we heard about your presence and participation in this meeting in Atenco, we wanted to take this opportunity to ask you to help us, in as much as you can, so that our voices can be heard, loudly and clearly announcing and denouncing the injustices of the Mexican government, through the repression and torture that we were subjected to the 3rd and 4th of May in Texcoco and Atenco….]

Then they called again in the public event and one of the women held the microphone to the cellphone and we (mostly) could hear. Two women standing behind me with their machetes started silently crying. Mothers of two of the prisoners. I had to get up and hug one and she started sobbing on my shoulder. It leaves me like a limp dishrag.

It fills me with rage. Disposable people. As one described herself/them, “We are cannon fodder.”

Separately Rachel and I spoke with three of the women who had been raped. More rage.

I bought one of the amazing drawings by the political prisoner who is now sentenced to 112 years in prison. Dona Trini’s husband. Sorry his name escapes me.

I can’t write more at the moment. The dishrag is emotionally spent.