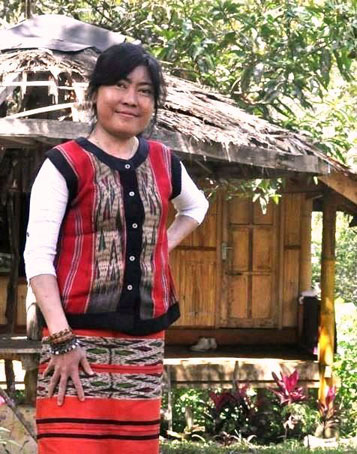 The prevailing discrimination towards indigenous women is at the top of her list of reasons. Indigenous women and indigenous peoples in general are deemed and often portrayed as lacking higher education, poor and unable to participate in the modern economic system, anti-development, tradition-oriented, rebellious, and the list goes on. The government and the media perpetuate negative messages  about them, along with other messages which negatively impact the self-confidence of indigenous women.

“The discrimination is the result of the long and systematic oppression of indigenous peoples’ rights,” says Pipi.

Pipi, a 29-year-old woman from East Kalimantan, Indonesia, is a community organizer for the Dayak Benuaq Ohokng tribe in two villages – Mamcong and Muara Tae village. She is a community organizer for Perempuan AMAN (Aliansi Masyarakat Adat Nusantara or Indigenous Peoples Alliance of the Archipelago) or AMAN Women-East Kalimantan, an organization that focuses on indigenous women’s rights. More specifically, she is a “cadre” organizer – a specially-trained community organizer – mobilizing and organizing “cadres” or activists of Perempuan AMAN. She is also a member of the JASS-inspired youth organization Forum Aktivis Perempuan Muda Indonesia (FAMM-Indonesia or Young Indonesian Women Activists’ Forum).

AMAN estimates that the number of indigenous peoples in Indonesia falls between 50 and 70 million people. Pipi’s tribe, Dayak, is a name of tribes that identifies the various indigenous peoples on the island of Borneo by the Kalimantan part of Indonesian. They are divided into about 450 ethno-linguistic groups. The original Dayak identity – the cultural, economic, religious and political life – has been preserved through their oral tradition.

But the Dayak traditions are in danger of slowly disappearing. They often feel intimidated when mingling with society, with people outside of their communities, Pipi observes. Because of the discrimination that they experience, they become ashamed of their identity and their culture. Some even make drastic changes in their appearance and demeanor by following the trends of other cultures so that they can be accepted, especially those who reside in the urban areas.

Pipi laments over the fact that indigenous women have been marginalized from economic activities, although they are rich in knowledge and skills on natural resources management. There are even unfortunate times when some indigenous people hide their identity to avoid further marginalization.

The situation is far worse among indigenous women. Many elders and tribes’ customs prescribe that young women should not get a higher education because their main role is domestic care. This role, the elders say, does not require being highly-skilled. However, there are some elders who are open to accept the changing roles and aspiration of young women to get better education, broaden their social lives, and join organizations. As Pipi puts it, “There should be changes in indigenous people’s values toward women’s role so that women can realize their potential for the benefit of communities.”

The corporate investments bring in a lot of problems for indigenous women. These have become a threat to their survival. Indigenous women’s reproductive health, as well as the children’s health becomes affected; their food becomes contaminated; and the plants in the forests that serve as their medicine become extinct. “Due to these resulting situations, I was motivated to rise up and speak up for the rights of indigenous women,” says Pipi.

Through her involvement in JASS’ 2013 Movement Building Institute (MBI) workshop organized by FAMM-Indonesia and JASS Southeast Asia, Pipi learned about power analysis as a tool for making sense of the indigenous women’s situation. Now she is more aware of indigenous women’s rights. One of her goals is for indigenous to women gain decision-making power in natural resource management, customary law, and traditional organizations.

At JASS’ MBI workshop, Pipi met plenty of young women activists from different sectors and backgrounds in Indonesia. Like her, they also struggle for social justice. This integration and exposure gave her more confidence to speak in public as an indigenous woman.

Pipi is extremely grateful that her family supports her activism. So far, none of them are against her actions and decisions because they see the benefit of her struggle to bring social justice to indigenous peoples, especially indigenous women. Pipi sees FAMM-Indonesia and JASS as allies to further build her confidence and start appreciating her culture and knowledge. Recently, she began to use natural ingredients in her food and is now using natural dyes for fabrics.

“Indigenous peoples can no longer ignore women’s voice and wisdom. We cannot regard one interest as more important than others. We need to unite to fight for our rights,” concludes Pipi.