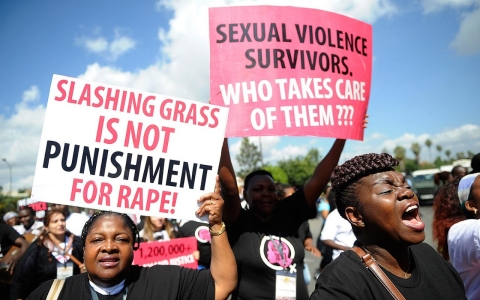 Sister ko mabva matakura masofa acho mukati rega ndifambe ndakasenga (Sister, your body looks like you carried the couch with you into town).
Hure (prostitute)
Eish mukoma vari kunakirwa kumba uku (Eish, your husband/boyfriend should be having the time of his life, sexually, with you)

Those are just some of the things I hear when I am on the street. That’s what we all hear as women living in urban centres in Zimbabwe. When we take taxis to work, or when we cross the road, or when we stop at a traffic light to buy some air time for our mobile phones. Some people have it upside down; they call this kind of unwanted commentary “compliments.” But they’re not. It’s street harassment and we are all familiar with it in some way.

In September 2014, a young woman at Harare’s main bus terminal was sitting in a minibus taxi when she was attacked. She was dragged out of the minibus and brutally assaulted by a group of about forty people, mostly male touts (bus conductors). They beat her and stripped off her clothes while hurling abuse at her for the “crime” of “improper” dress. Some passers-by tried to intervene on her behalf. But a lot more people joined in with the angry mob—all outraged at the fact that this woman had had the gall to wear “inappropriate” clothing. And there I was thinking that wearing inappropriate clothes meant putting on a summer dress in the middle of winter, or donning a pair of shorts to a board meeting.

Even though the attack drew national attention, most of us figured that the response would be the same lacklustre one we’ve come to expect from cases of street harassment and assault. After all, in Zimbabwe, a sex offender can get off by paying a fine as little as $5.

What’s really interesting is how this case and another attack in December captured the imagination of those using social media—many of whom supported the attackers and wrote messages that reinforced the idea that women can and should be told what to wear; and if not, face violent consequences. But this is also how two men implicated in the crime were caught and arrested, after video footage of the assault went viral online.

In late March 2015, in an unprecedented court decision, a Harare magistrate sentenced the two men to twelve months in jail with the possibility of a four-month suspension on condition of good behaviour. I was shocked—the judiciary was actually taking a stand against this violent behaviour and sentencing those involved? The punishment should have been stiffer but it’s a good first step for Zimbabwean women. I felt like my experiences of harassment were being recognised; like I was not crazy to think this is not okay.

This verdict is good news for activists who face even higher levels of harassment and violence in public spaces. “Our laws have been formed in such a way that women can be protected in private spaces, for example the Domestic Violence Act,” says Winnet Shamuyarira of Katswe Sistahood. “But a lot of violence is taking place in public spaces so this is a landmark ruling in the sense that it sends a message to would-be violators of women that you can’t just take a woman and think that it’s a piece of flesh that you can just decide to abuse, harass and do as you wish.”

Zimbabwean feminists, led by Katswe Sistahood, took to the streets in protest of the September incident and other such violent acts.  Their actions sparked a national conversation, shining a spotlight on the violence that women experience every day, whether in the streets or the home such that when the attack in December took place, people were enraged by the continuous wars perpetrated on women’s bodies in public spaces.

But is it good enough? Just days after the historic sentencing, 51 year-old Lessie Tenai was beaten to death by her partner and his two friends. Why? Because she was “wearing a miniskirt that was too short for her age.” This vicious attack reinforces the truth that the struggle for ownership of our own bodies goes beyond age or location—Tenai came from the rural village of Madzyiya.

Even Vice President, formerly Minister of Defence, Emerson Mnangagwa, a man known for his less-than-progressive politics condemned the attacks on women, or at least tried to:

Some of us … who were there around 1918 [know that] women used to wear nhembe (women’s traditional clothing) but no one protested. The men would put on madhumbu and no one protested. Then came the whites with clothes that covered the whole body. If a woman parades herself in a miniskirt, leave her. That is what she wants. We went to war for freedom, fighting so that all people would be free. So the new Constitution speaks of freedom of choice and freedom of expression. What matters are her morals, not dressing, it is her right.

Aside from the moral policing—it shouldn’t matter whether a woman is “good” or “morally acceptable” at all and as we know from the statistics, it doesn’t—the substance of his comment hits upon some key truths.

Thirty years ago, Zimbabwean women took to the streets to fight for the right to be considered legal adults. The reason I’m allowed to drive a car or own a house is because of the battle those women who came before me fought. They were also called names, they were mocked and harassed but they won. Now, in 2015, Zimbabwean women still have a long way to go to actually enjoy all the rights of a legal adult—and that includes having the choice to wear whatever the hell we want.

Photo: An image from the MyDressMyChoice march in Kenya, Al Jazeera

This blog post was co-written with Winnet Shamuyarira of Katswe Sistahood.