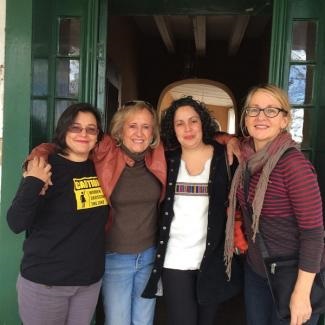 Five years ago many wonderful Santa Feans joined my mother, Marg, to organize the first JASS gathering, an important step towards building our circle of solidarity with you. We shared powerful stories from our work with grassroots women making change in Mesoamerica, and my colleagues, Marusia López Cruz from Mexico and Daysi Flores from Honduras, brought to life women human rights defenders’ often invisible work in that embattled region. It wasn’t hard for Santa Feans, whose city is deeply embedded in a history that extends south of the border, to recognize the roots of today’s border crisis taking shape and the role women play as first responders in organizing their communities to confront violence and injustice, a product of U.S. policy.

Many of you became our most passionate supporters. Mayor Gonzalez and the City Council declared October 18 a day of celebration to honor all JASS does to ensure that grassroots women leaders and activists are stronger and safer in the context of political violence stemming from decades of failed U.S. policy. Your support since then enabled us to build a powerful regional network – the Mesoamerican Women Human Rights Defenders Initiative – that today, along with JASS, creates webs of community-based protection for activists defending land, water, bodies, and the right to speak out. Thank you!

As the founding Executive Director, my upbringing in Santa Fe is part of JASS’ origin story. Growing up there – influenced by a bold mother like Marg – planted the seeds that grew into who JASS is and what we do. The community around us – bilingual, multicultural, cross-border – instilled in me a frame of mind that perfectly clarified the interdependence of the Global North and the Global South and the deep ties especially between the U.S. and Mesoamerica. The powerful presence of Native Americans and their vital role as stewards of land, nature, and culture directly links to JASS’ focused work with indigenous and rural women defending their territories in Mexico, Guatemala and Honduras.

When I left New Mexico for college on the East Coast, I realized how radically different our community actually is. Our special blend of identities and cultures has been a crucial part of how I have led JASS over the past 16 years and fed into our role as bridge-builders across borders, identities, and seemingly distinct issues. JASS would not be the unique movement-building organization it is today without the values and out-of-the-box mindset that New Mexico taught me. When Marusia first came to Santa Fe back in 2014, she said to me and my mother, “Now I understand the roots of JASS.”

Even after decades away, I still think of Santa Fe as home, in large part because of the community we have built together. Your solidarity and support have not only inspired me to keep this work going – you have also sustained thousands of women activists around the world who feel less alone because they know you stand with them. You have helped them feel heard, respected, and seen.

Your continued support is more important and urgent than ever as I prepare to step down from the Executive Director role at the end of February and hand the reigns to new, capable, and visionary leadership. Navigating organizational change takes time and resources, and even more so when such a critical moment of renewal is happening while our many partners are facing new levels of violence and challenges.

Happy JASS Day to you all! Thank you Santa Fe, thank you New Mexico, and thank you especially to you all who have worked so hard to make JASS and the women we accompany stronger, louder, and bolder. As I continue to play an important role with JASS in the years to come, I look forward to building an even closer connection between JASS and Santa Fe with you.