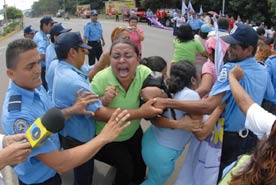 On Nov. 25, 2008, police blocked 400 women’s rights activists from marching in Managua’s annual commemoration of the International Day for the Elimination of Violence against Women. This shocking action came at the behest of Daniel Ortega, former revolutionary leader and current Nicaraguan president, in a bid to silence opponents of his harsh anti-abortion policies.

The halting of the feminist protest is just the latest in a series of attacks that reflect the FSLN’s rightward swing. As ever, a group’s political direction can be gauged by its attitude toward women.

War on feminists. In October 2006, Nicaragua outlawed therapeutic abortion, i.e., termination of a pregnancy to save a mother’s life. The FSLN backed the measure in a cynical alliance with conservatives and the Catholic Church. During the first year of the ban, at least 80 women died as a result. In November 2007, the Ortega government added criminal sanctions to the law. Since then, the FSLN and Ortega have attempted to stifle feminist critics who are exposing their severely tarnished image.

In 2007, a church-affiliated group filed a complaint against nine leading feminists that accused them of concealing the rape of a girl by her stepfather. The confusing charges stem from the fact that, four years earlier, the feminists had helped a nine-year-old girl obtain a then-legal therapeutic abortion. Although prosecutors are required to either close a complaint or bring charges within three months, no action has been taken, leaving the women in limbo.

In October 2008, Nicaraguan authorities raided the offices of the Communications Research Center (CINCO) and the Autonomous Women’s Movement (MAM). They confiscated files and computers amid accusations that the groups had illegally promoted abortions and engaged in improper financial dealings.

Later that month, Dr. Vilma Núñez and staff of the Nicaraguan Center for Human Rights (CENIDH) were physically and verbally attacked by Sandinista supporters when they arrived for a meeting with the General Prosecutor. CENIDH was there to attend an investigative hearing of the Civil Coordinator, an umbrella group of several hundred social-issue organizations that has also opposed criminalization of abortion.

In addition to the abortion issue, feminists across Latin America have earned Ortega’s ire by publicly denouncing him for sexual abuse charges brought forward 10 years ago by his stepdaughter Zoilamérica Narváez. Ortega and Murillo (Narváez’s mother) deny the charges. But feminists claim Ortega used his political clout to prevent an investigation or trial.

Murillo is standing by her man. She formed her own women’s group and penned a manifesto titled “The ‘Feminist’ Connection and Low Intensity Warfare.” The aim of her organization is to provide an antidote to what Murillo dubs “false feminism.” She lauds women who embrace traditional family roles, and characterizes feminists as oligarchs, counterrevolutionaries, and well-paid agents of imperialism.

A dramatic about-face. What has become of revolutionary Nicaragua, which electrified the globe by overthrowing dictator Anastasio Somoza and establishing a workers’ and peasants’ government in the 1980s? In the first place, the U.S. spent a decade trying to destroy the FSLN movement by arming, training and funding its bloody contra opponents.

And the Sandinistas did not fulfill their promises to the masses. Rather than advancing to socialism, they advocated a “mixed economy” that included both state-run industries and for-profit enterprises — a Stalinist scheme that always leaves capitalism firmly in control. (Stalin led the bureaucratic counterrevolution that eventually led to the destruction of workers states in Russia and Eastern Europe.) After initial expropriation of Somoza family holdings, the Sandinistas put the brakes on land reform and nationalization of vital industries.

The FSLN also refused to recognize the national rights of indigenous communities along the Atlantic coast, demanding that they assimilate into Nicaraguan society. Female militants, who made up 30 percent of the Sandinista military forces, were told to postpone demands for equality in favor of building the new society.

These failures crippled the Sandinistas’ ability to create fundamental change.

Thus in 1990, a disillusioned, war-weary populace voted U.S.-backed Violeta Chamorro into office in an attempt to lift Uncle Sam’s heel from their throats. However, Ortega remained active in politics, making unsuccessful presidential bids in 1996 and 2001.

But Ortega’s presidential campaign painted a different picture. His campaign slogan, “All reunited through reconciliation,” was illustrated by his vice-presidential choice, former contra leader Jaime Morales Carazo, his close alliance with the Catholic Church and evangelicals, and his electoral plank against abortion.

Ortega is no longer seen as a threat to Washington or capitalism. The day before his inauguration, he met with Bush administration officials offering $175 million from the Millennium Challenge Corporation. The real estate and tourism industries supported Ortega’s bid for office because of his promise to respect private property. Foreign investors continue to pour money into the country.

While courting external investment, Ortega and Murillo hypocritically denounce feminists and NGOs as agents of “low-intensity” foreign subversion. Pro-Sandinista media have claimed that abortion rights are “a flag raised by Nicaraguan pseudo-feminists with the intention of obtaining millions in foreign funds.” They also resort to the tired tactic of accusing advocates for women’s rights with being privileged imperialist pawns and undermining the national culture.

Stand up for women. Human rights defenders across the Americas are outraged by the Nicaraguan government’s misogynist attacks. Ortega’s official visits have sparked protests from Paraguay to Honduras. In October 2008, feminists at the Americas Social Forum in Guatemala passed a resolution condemning the government’s actions. Radical Women in the U.S. has also sent a protest letter.

Women across the Americas will not wait in line for their demands to be met. It is time for “high-intensity” opposition to all who thwart women’s voices and control over their own bodies!

Article written by Laura Mannen of Portland, Ore., is a Latin America solidarity activist and a teacher, unionist, and mother. Email her at ljmannen@nullmsn.com. (Photo credit.)