The WoMin–JASS Southern Africa Feminist Movement Builders School (1-10 March) was a meeting like no other: 32 women from seven countries across Africa, representing a diversity of languages, ages, backgrounds and more. The one thing these women activists had in common is that all of them work in and fight against big business, corporate mining interests and other extractives industries.

On the first day, we sat together in a circle, each woman taking the floor to introduce themselves in song and dance, with laughter and stories about their activist journeys. Every single woman human rights defender (WHRD) in the room had a story of the violence they face in their fight against extractive industries. From Marange in Zimbabwe to the Democratic Republic of Congo to Nigeria, they each spoke about what it means to be women human rights defenders, wrestling with how to sustain themselves in the face of often overwhelming challenges. Their commitment to their “vocation” as defenders always brings to mind the words of Mexican ecologist, sociologist and activist, Gustavo Castro reflecting on the assassination of environmental and human rights campaigner, Berta Caceres, “Berta didn’t die for a river. Her work wasn’t limited to local issues. She died for something we’re all responsible for; the biodiversity of the planet. We can’t turn our backs on her cause.”

Making a space for women’s voices…

As women struggle for the biodiversity of the planet, defend livelihoods threatened by mining and extractives, and put their lives on the line, we need to prioritise the protection of WHRDs. This starts with creating safe spaces, real or virtual for defenders to learn, share and build solidarities together. The value of spaces to revitalise our activism, re-focus our strategies and reconnect with other defenders is immeasurable.  Aimée Espérance Matungulu Nduwa who works with the Rural Women for Development Collective in DRC to fight against extractive industries and their devastating impact on people and the environment despite facing threats from big mining companies highlights the need to carve out space for women’s voices to be heard:

Firstly, there’s an absence of women’s involvement in mining activities and resistance against such due to women’s lack of knowledge of extractives industries. Women are seen as ‘victims’ but not as people with a voice and stake in community decisions. But they are the most directly affected once these industries have settled in. For instance, women are forcibly removed from the places where minerals are found and lose the lands that are their means of subsistence. They become poor, displaced and often pushed into … marginal enterprises in order to survive.

The face of patriarchy… 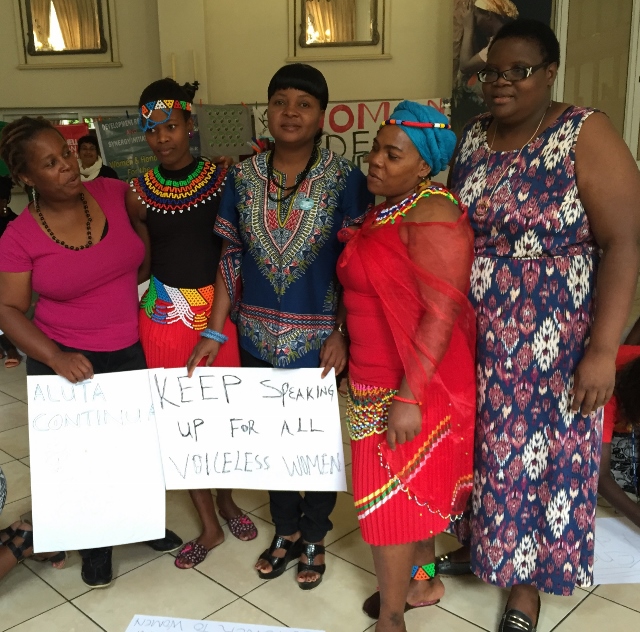 The mining and extractives sector has the face of patriarchy, neo-colonialism and capitalism. While women human rights defenders’ contexts may look different, many of their struggles are the same. Whether you are talking about militarised diamond fields in Marange, Zimbabwe, oil pollution in the Niger Delta, coal mining in Mpumalanga South Africa, or hydro-power dam constructions in Bandundu, The Democratic Republic of Congo. In many cases, mining companies are predominantly owned by white males, with mostly Black male labourers in the mines. The mining companies are concerned with profits first and foremost. So it’s not surprising that women, particularly Black women and other women of colour, have no input in most deals and decisions, and that they bear the brunt of these industries.

Take a look at Marange, Zimbabwe where diamond mining really does impact women miners differently to men.  Women are expected to ‘carry the kitchen down the mining shafts’ in other words, performing gender roles such as preparing food for the men on top of their expected work. Salary scales tend to be determined by gender rather than work done, for instance, women miners earn an average of $100-$200 for a job that would compensate their male counterparts with $400-$500. Sexual violence is rampant in Marange, a highly-militarised government-protected area in which there have been many reported cases of state security agents using rape to ‘punish’ women who are seen as ‘stubborn.’ There is high incidence of sexual harassment and almost complete lack of legal recourse for sexual violence survivors.

The Democratic Republic of Congo is another example of the devastating effects of extractivism on women. The INGA Dam project is set to be the biggest hydroelectric power generator in Africa by 2020. However, communities, particularly women, and their livelihoods and lands are at risk.  Challenging the INGA Dam initiative has become dangerous for activists who suffer threats, assassinations, sexualised violence and some have been forced into hiding to protect themselves.

Women’s agency; against all odds 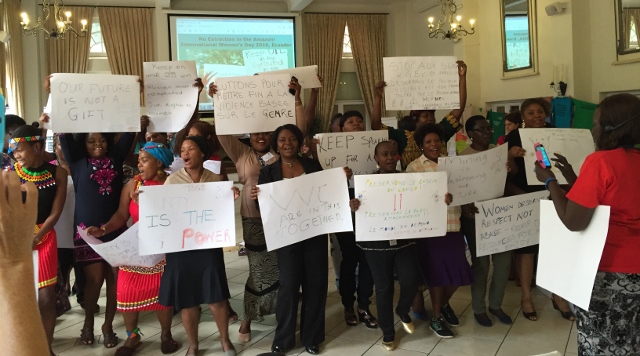 In spite of the threats to their personhood, women human rights defenders continue to resist this narrative and demand accountability from their states and corporate interests. Their work challenges power and capitalism, and is often met with violent reprisals because activists are a threat to the status quo. For Aimée, giving up or walking away from this struggle is not an option: “We are activists and we are defending rights…. For us it is a vocation that we cannot abandon because of threats.”

During the school, Berta Caceres, a Honduran activist was assassinated for her work to protect her community and ancestral lands from transnational corporate interests. Berta’s assassination is a familiar story for many defenders who are challenging the system. The assassination resonated with many of the women in the WoMin-JASS school, some of whom remembered meeting Berta over the years—a comrade in the struggle. And others, like WHRDs from the DRC, who are facing high levels of violence in their fight against government-backed hydroelectricity projects. Many of the participants at the school shared their own tributes to Berta and messages of encouragement to defenders around the world, a reminder that in the face of violence we can and must find ways to reach out to strengthen our movements and build solidarity across borders.

Berta didn’t die for a river. Her work wasn’t limited to local issues. She died for something we’re all responsible for; the biodiversity of the planet. We can’t turn our backs on her cause….

This blog was written by Winnet Shamuyarira.