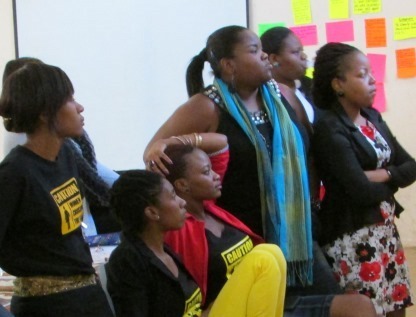 Sometimes you just don’t know where things will end up. In 2009, JASS held a series of movement building institutes (MBIs) in Southern Africa that were attended by feminist activists in the region. These institutes catalysed energy and intent in different ways. The young women from Zambia who participated in the MBIs returned to their homes determined to ensure that their societies and communities transform. As Wala Nalungwe says, “The flame that was lit at the MBIs it would not end there. We did not want that. We wanted a flame that grows into a bigger fire.” And this they tried to do, growing a constituency of young vibrant women, they decided to pull their skills together and formed Generation Alive (GAL).

Generation Alive changed me. It woke me up, shifted my thinking, and I started questioning. My going to the first meeting that JASS organised was by accident but there my thinking changed. I seem to have developed different eyes and ears. Creating safe spaces where I can be free and not feel judged is important to me. Being part of Generation Alive has made me bold. ~ Chanda Katongo

At the heart of GAL is the belief in the transformative power of feminism and feminist analysis that informs action. Through the creation of safe spaces to meet, talk, dance and be together GAL came to understand as Chanda explains the centrality of sex, sexuality and the control of women’s bodies. This realisation has slowly shifted GAL’s focus from their initial issue of getting young women in leadership spaces to influence decision-making to sexual and reproductive health rights based on their experiences and rooted in the issues driving their discussions.

There is something about the body, about having a vagina and breasts that means something [in the world we live in].

Now in 2013, GAL grapples with moving forward with their organising agendas in a context that has become increasingly conservative and in a country ruled by the Ten Commandments. GAL has faced severe backlash on their journey at an individual and collective level.

This experience and attempts at working in partnership with other organisations has meant grappling with the tensions of being a loose formation, the need to be autonomous but needing an organisational identity.  GAL finally made the decision to register formally, as a feminist society. It is at this point that they once again approach JASS SNA to support a strategic thinking and planning process that would ground the broader membership in feminist politics, reflect on the current organising context, the principles for their work and map out their next steps collectively.

GAL draws inspiration from Zimbabwean feminist movement building organisation and JASS partner, Katswe Sisterhood. About four hundred kilometres away from Lusaka, Katswe is building a dynamic movement of women who are challenging stigma, deconstructing taboos, dismantling patriarchy through creating safe spaces for women to come together to build solidarity across difference and diversity and imagine exciting alternatives for all women that moves them into action. This inspiration led to an exchange between Katswe (Rudo Chigudu) and fifteen young women from GAL in Zambia. The exchange allowed for the sharing of the story (herstory, politics, strategy and action) of Katswe Sistahood to inspire GAL members as they move towards building their organisation and organising.

Rudo Chigudu spoke to the divisions [amongst women] that flourish in a patriarchal society, “Women say ‘I am not as bad as her, I am a sex worker, at least I am not a lesbian’ but the issue is the system so how do we come together despite differences in values and beliefs.” The sharing brought home three critical issues: the meaning of feminist Sistahood, the importance of being committed and passionate about the issues that sit in women’s hearts and bodies, and the need to consolidate as a group before reaching out to others.

Learning from Katswe , we need to review two things – we need to identify with the issues and be passionate about it and to be clear when it comes to what we are doing and why we are here, before we reach out to other women. ~ Nana Zulu

Katswe is using the regional sexual and reproductive health rights platform, Pepeta, to link up with vibrant feminist movements across the region—from SYWON (the Swaziland Young Women’s Network) to Young Women in Action in Zambia—inviting young women activists to share and exchange ideas and learn collectively.

When you are in this ‘box’ [patriarchy] you don’t have so much to say, you have these various institutions putting pressure on you, telling you to do things in a certain way. When you are in that box with other people, you are safer but you can also organize yourself with like-minded people who believe what you believe so that you [can come together with] a great and big voice. ~ Lindsay, GAL member

For the women of GAL, Pepeta is just one of the ways in which they’re connecting with women in their community and across the region, challenging the conservatism that defines so many organising spaces, and finding exciting ways to deepen their analysis and build solidarity across difference and diversity.