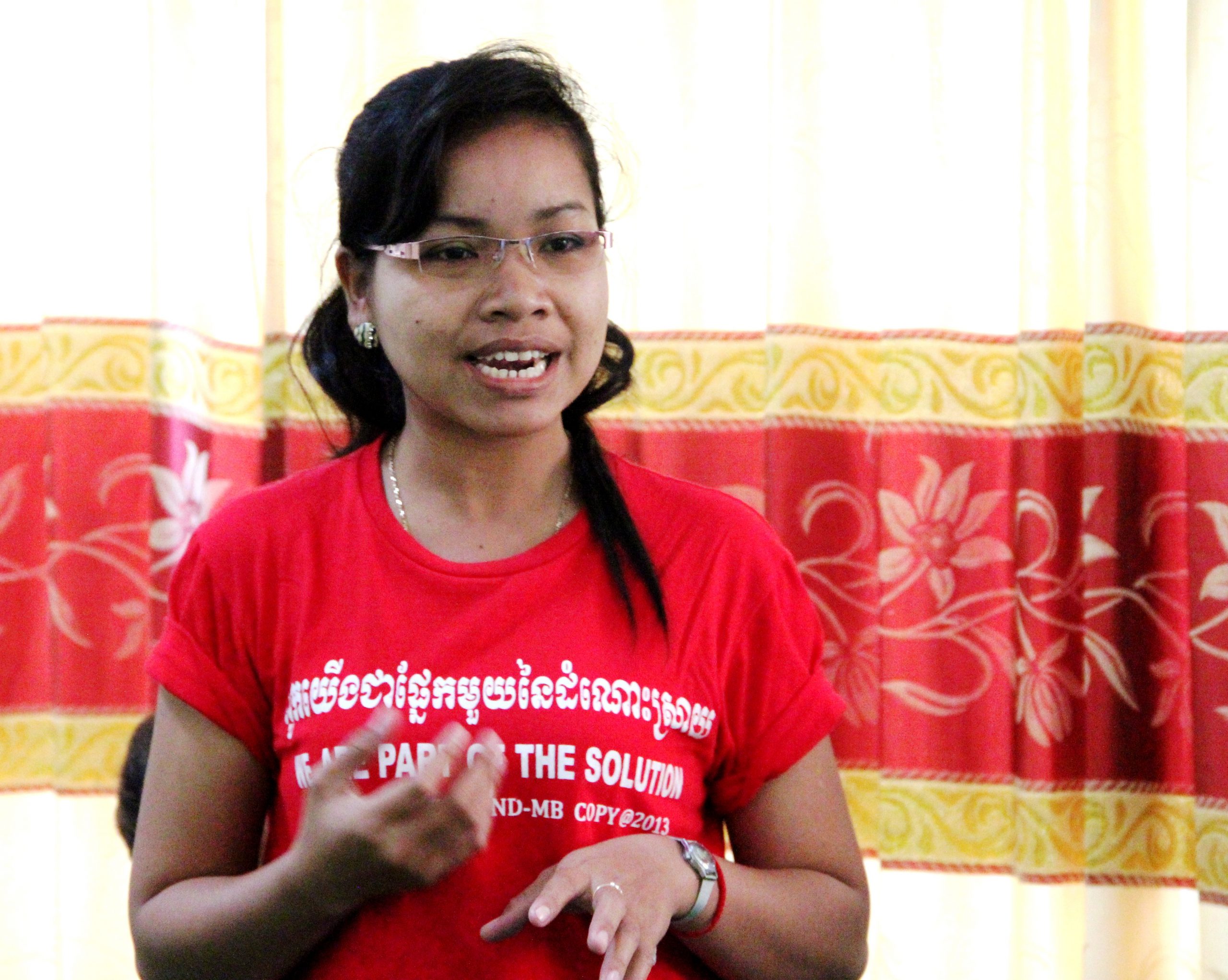 I have learned from my experience and I am going to encourage more women garment workers to stand up for our rights and power. Our rights have been gravely abused; women workers’ voices need to be heard. Women workers have always demanded for a common solution to the plight of garment workers. Laws should not remain only in paper; these must be respected by all Cambodian people – even the rich and the elite.

Rural Women as Factory Workers in the City

When we imagine the picture of the city, we have an exciting image in mind. But for me, that was not the case. Right from the start, I never had this feeling because I was determined to fulfill my mission – to earn money to help my family.  And like all Cambodian women from the rural areas, I am determined to earn for my family. While there were a thousand reasons why I decided to leave my hometown to work in Phnom Penh City, poverty was the main reason.

My family can’t grow rice in the field because we don’t have an irrigation system. Instead, we grew vegetables, but we didn’t make much profit from them because they sold for less at the market. In turn, basic goods that we needed were very expensive that my family couldn’t afford them. During that time, my mother also got very ill.  That was when I decided to give up school after I passed secondary school in 2003.

So in 2006, I started to work as a factory worker in Phnom Penh City. I was just a teenager then; I was 17 years old. It was my first time to move to Phnom Penh to find a job. At that time, garment factories in Cambodia were growing—even women and girls from other provinces in Cambodia were migrating too. Most of the community people mistakenly believed that their children will have a good-paying job, maintain a good life, and build a good future. They all believed that the Cambodian government is starting to develop the country by constructing tall buildings and expensive bridges.

And so did I. I believed it so much that when I got a job in a garment factory, I was filled with new hope that I would be able to save my earnings—US$61 a month—for my family back home.

At first, I found everything in the factory exciting. Everything was new—the environment and the machines. We all focused on our work and did not speak to each other while working.

When I received my first salary – it added to my thrill! I couldn’t sleep for many nights after I got it. I saved a big percentage of my income for my family. I also bought new clothes for myself.  It was a very fresh experience for me!

My daily routine consisted of waking up very early in the morning – around 5:30 am because I had to be in a group (group transportation) to get to the workplace.  I was so afraid of being left behind. I was so afraid of being late too! If we were late, even by a minute, management would deduct 1,000 Cambodian riels (equivalent to 25c US$).   Even garment workers who often go to the toilet would have salary deductions too.

After a while, I began to realize how bad these working conditions were, and I wasn’t the only one. Other women felt it too. Having low wages, working under miserable work conditions, forced to work long hours, having heavy workload, lack of occupational safety in the factory, lack of fresh air, having dirty toilets, difficulty in making friends with each other or caring about each other, feeling alone, experiencing different kinds of abuse – these are the daily grind of a garment worker in Phnom Penh.

My living situation wasn’t any better. I lived with four to five people in a tiny room where we washed, ate and slept. I never took a bath before going to bed because I worried about my safety. Our male neighbors would always watch women take a bath because the dormitories did not have secure bathroom walls.

Some women factory workers I know also experienced abuse from male workers in our workplace and in our house. I just kept silent; back then I was not brave to tell anyone so I continued living and working without any solution in sight.

Our employers refused to understand the challenges we were facing. They forced us to work more. Some of our friends contracted work-related diseases such as typhoid and heavy cough, but the management did not care at all.

When auditors and inspectors would come, the workers were provided with masks, facility, clean toilet but one or two days after inspection, they would stop distributing the masks. Also, the manager tried to lobby workers to give good speeches in support of the factory when they were interviewed by the auditor. They forced them to give good comments about the work conditions in the factory. If workers refused, they would threaten them.

Breaking Out of the Factory

I heard about the organization, Women Agenda for Change (WAC) – which is now changed to Workers’ Information Center (WIC). I know WIC from my friends who learned about workers’ rights through them.

My friends introduced them to me. Through WIC, I found out about different views from outside of the factory.  So, I started to change myself. I joined with them. They gave me the space to talk and share about the challenges that I faced. I learned a lot from them. They let me know about our rights, labor laws, what workers can do, why we are together, how and why we have to challenge the company.

It was WIC who tapped my leadership potential and passion. Every time I attended the WIC dialogues – I did not feel alone. I felt I had many friends whom I can share my experiences with, whom I can talk to – warm and closely. In 2010, I stopped working for factories and went back to high school to complete my education because the living and working conditions only got worse, as did the wage.  After a series of trainings, I volunteered with WIC. I realized that I like this volunteer work and it fit me.

I have been working with WIC for five years now. As a facilitator – I am responsible for organizing garment workers’ communities, providing training and information, and providing health care awareness, coaching, and discussion. I use popular education tools (some of which I learned from JASS) that empower women workers to speak out, break the culture of silence, share information, and discuss Cambodian laws – especially labor laws.

I have chosen to strengthen my power and leadership skills by learning through my own experiences, by working with other non-government organizations (NGO’s), workers’ associations, different groups like cross-sector groups, United Sisterhood, and young women’s groups in Cambodia such as Cambodian Young Women’s Empowerment Network (CYWEN), and JASS. I see a lot of women who have similar passion and agenda. It is amazing how we can learn to find common ways to build new and dynamic movements.

Sreymom Loem joined a JASS workshop in Cambodia in 2014. She was one of the facilitators of JASS’ regional campaign One Day, One Voice (ODOV) in 2014.