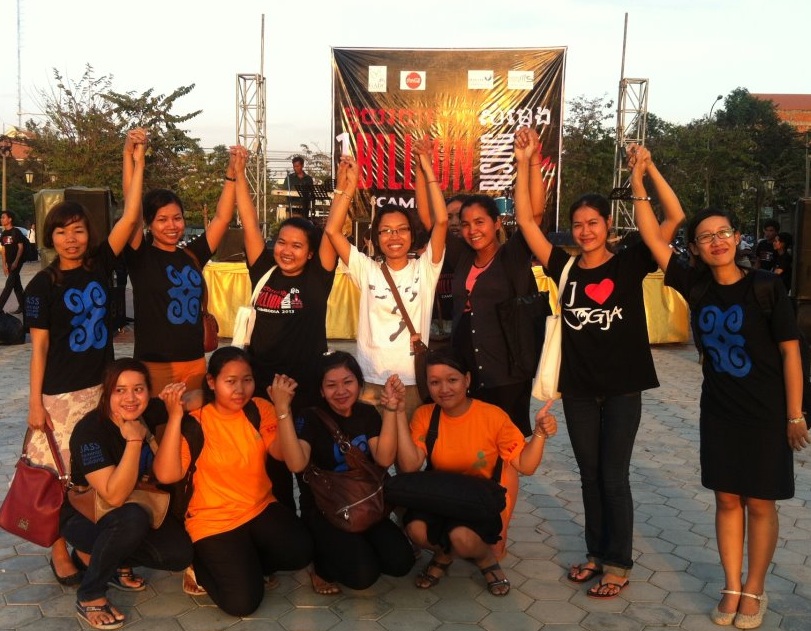 Why do men rape women?

This is a simple question with a complex answer. My friends, relatives and colleagues – both men and women – often ask this question. Last year, Cambodians were put on the spotlight when an Asian-wide survey result found that at least 20 per cent of the Cambodian male population admitted to committing rape.

As part of the JASS Southeast Asia team and as a member of the Cambodian Young Women’s Empowerment Network (CYWEN), I am proud to have the chance to be part of a campaign against rape. Cambodia led the JASS One Day, One Voice regional campaign last year. CYWEN led the country-level string of activities.

CYWEN Leads One Day, One Voice

Last year was the third time for CYWEN to organize the One Day, One Voice campaign of JASS Southeast Asia. One of the highlights of the CYWEN-led One Day, One Voice campaign was a dialogue with students with the theme “Are women objects to be raped?”  The dialogue took place on 1 December 2013 at the Build Bright University in Phnom Penh where 150 young students participated, 97 per cent of whom are women.

The culminating activity of the dialogue was the “pledge of commitment” following the panel discussion. Some of the participants called upon the other students to join together against social injustices that lead to the rape of women.

The young women’s realizations and pledges were inspiring:

“Being part of the discussion was an important learning experience for me. I am now aware, for example, of the real barriers that prevent women who have been raped from reporting rape cases. Now I know how to find justice and promote women’s participation to stop rape. We are starting to build our voice and promote our rights,” said Chhum Chandara, a young woman who volunteered in the event and recently joined the CYWEN network.

“I learned about the One Day, One Voice campaign through CYWEN’s Facebook posts. It was a space for meeting with and sharing ideas with other young women from different universities in Phnom Penh. I realized that women who have been raped face a lot of hindrance in finding justice. I was shocked to find that there are a lot of rape cases in the country. Women do not always get the justice that they deserve. The Cambodian court of justice is not always ‘independent’. I found out that women who were raped have other platforms for redress apart from the national courts; rape victims can also use international statutes such as the Convention on the Elimination of Discrimination against Women (CEDAW),” said Chher Davy, a student from the Royal University of Law and Economics (RULE) Cambodia and part of the CYWEN network in universities.

“I feel strongly against rape. If I meet a woman who has experienced rape, I will explain to her that it is not her fault. I wish to see all the perpetrators of rape be sentenced accordingly through the Cambodian justice system,” said Cha Davy of the CYWEN network.

Rape is one of the most serious and also one of the most common crimes against women in Cambodia. Although it is impossible to know the full extent or the actual number of cases, the available information indicates that rape and other forms of sexual violence are extremely prevalent, and sometimes end in murder.

The Cambodia Center for Human Rights (CCHR) reported 32 rape cases during the first two months of 2013 alone. Of these 32 cases, at least 43 perpetrators were involved and in some cases, victims reported having an unknown number of perpetrators. In 2012, there were 229 reported rape cases recorded by the CCHR. Of these 229 cases, 250 victims were accounted for, four of which were male. At least 270 perpetrators were involved; again, some cases are reported as having an unknown number of perpetrators. Ten cases even ended with murder.

Rape in Cambodia can be viewed within the context of cultural and social attitudes towards women and women’s sexuality in Cambodia. In this context: 1) men are perceived as having more value than women in Cambodian society; (2) women are supposed to be subservient to men; and (3) traditionally, women are expected to remain virgins until marriage, and a woman who “loses her virginity” before marriage, even through rape is often blamed for it.

More attention is usually paid to the victim’s “loss of virginity” and the effect on the family’s reputation, usually leading the victim to keep silent about the rape, or to refuse to report it to the authorities and seek to put her perpetrator in jail. This attitude is even encouraged by family and community members including local authorities such as village and commune chiefs and local police! Through the traditional attitudes and gender stereotypes against women, rape victims are left to deal with shame, stigma, fear and loneliness because of the lack of support from family and friends.

So back to the question, why do men rape women? Given the Cambodian cultural context, it is not surprising that a lot of Cambodians – both men and women – would still say “because women wear short skirts” or “because women go out at night with men they do not know well”. Victim blaming is still the norm in Cambodia.

I reject all the above-mentioned reasons. I think the main reason is power. It is because of the power that men exercise over women in an unequal Cambodian society that treats men better than women and accords men better treatment even if they are rapists.

The good news is, the young women are standing up to inequality. Young women are creating spaces to reach out to more women and be informed about rape and violence against women.

It is a huge task. I am now speaking on behalf of all the young women members and network of CYWEN when I say that we are not afraid to put a stop to rape in Cambodia. It may take a very long time but we say ending rape in Cambodia starts NOW.