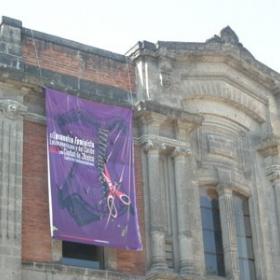 Over a thousand women from all over Latin America and the Carribean have gathered for the XI Feminist Encuentro in Mexico City. The debates have been lively, the ideas and questions brought up in the opening panels and in a number of the self-organized spaces very though-provoking. Among the many women who are here, the presence, voice and demands of indigenous, afro-descendant and transgendered women, and the autonomous women’s movement have been felt. From Martha Sanchez and Jenny de la Torre Córdoba, who were on the opening panel, to the autonomous women’s declaration and the Manifesto of the Transgendered Brazilian Women, posted on the Petateras Blog, many voices and a diversity of feminist expressions have indeed gathered in this space. So much diversity (in terms of different currents of feminist thought, women who don’t necessarily identify as feminists but are coming into this space in a spirit of dialogue, and in particular indigenous and african-descent women who speak about how their experience as women and as feminists is different because of their distinct contexts and life circumstances, and the added layer of racism that they face in society, as well as some expressions of racism and paternalism that they have encountered from other feminists) is not a simple thing to manage. 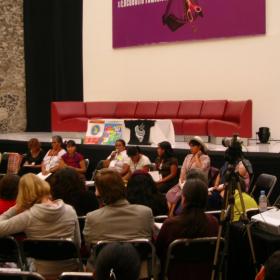 Even with these challenges, many of the women present express their desire to be in dialogue and to continue these dialogues, to hear one another’s viewpoints and begin to tease out what we mean when we talk about feminisms, a diversity of feminisms, so that from there we can build a solid ground on which to strengthen the feminist movement and feminist action in the region.