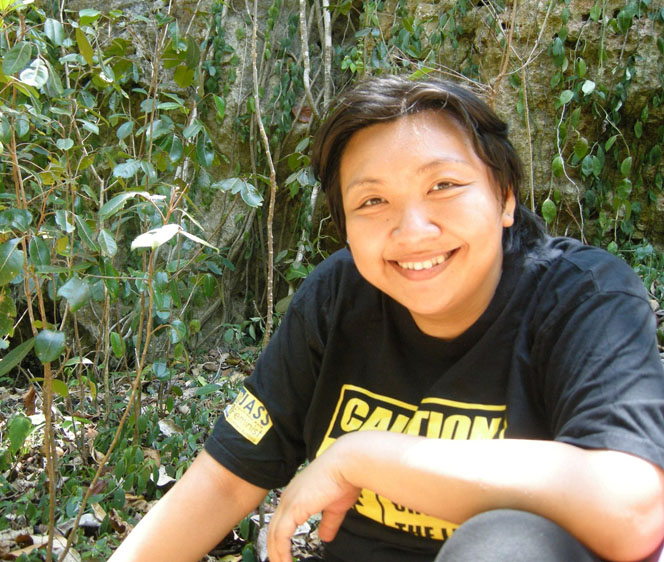 We chatted on Facebook the day before Maria Mustika died. We talked about the #DefendHer campaign of JASS (Just Associates), Global Fund for Women and MADRE. Maria volunteered to translate the #DefendHer messages into Indonesian for Magdalena Kafiar, one of the women human rights defenders featured in the campaign. Always willing to help – that’s how I’ll always remember her. And that, among her other positive characteristics, is what most people recall when they think of Maria.

Maria Mustika was a young Indonesian feminist activist who was actively involved in JASS Southeast Asia, participating as a young activist in its early feminist leadership trainings at national and regional levels and soon after becoming the coordinator for JASS Indonesia. Thanks to her leadership with fellow activists, the young women’s network FAMM-Indonesia (Forum Aktivis Perempuan Muda) was formed in 2012, a group that she helped nurture as a co-coordinator to become 300+ members who relied on FAMM as a safe place of solidarity and collective strength.

She was also an LGBT activist in Indonesia. GAYa NUSANTARA, the first organization that she joined as an activist back in 2006 was where she organized fellow LGBTs. Later on, with the support of her husband and a few of her friends, Maria helped to provide shelter and counselling to LGBT youth who are victims of violence, including domestic violence. Niken Lestari, one of her closest friends and who’s also one of her co-leaders in FAMM-Indonesia, recalls: “Maria had a strong compassion and empathy for others. In these capacities, she was easily approached and trusted by people who readily shared their own stories. She had her own trauma that she used as an influence and an entry point to build safe spaces for FAMM-Indonesia members.”

Apart from organizing young women and LGBT youth, she also organized displaced women workers in her province, Surabaya, through Samitra Abhaya KPPD, an organization that advocates for the rights of home-based workers and domestic workers. Through KontraS Surabaya, Maria also helped the survivors and relatives of victims of former Indonesian President Suharto’s anti-communist killings.

Everyone who knew Maria was shocked over her passing. Some of them knew about her long-standing illness; others didn’t. Maria actually suffered from a congenital disease. She was born with a heart defect; her heart was smaller than an average human heart. It was ironic how the physical smallness of her heart stood in stark contrast to her having a big heart for everyone.

What complicated this disease was the fact that she also had hyperthyroidism – an illness that weakened her till her last days. She was also three months pregnant, which also added to her complex condition.

But even with all her illnesses, she still had the limitless energy to help her family, friends, and colleagues – up until her last breath. And whether her friends knew about her illness or not – everyone was just as devastated upon learning about her passing.

One of Maria’s mentors, Indonesian feminist and JASS co-founder Nani Zulminarni shares: “Maria was a loving person who cared more about others than she cared about herself. She fought for the minority groups, especially the ones who were discriminated against by virtue of their identity, race, gender and beliefs. She dedicated her life to social movements and to the women’s struggle. Maria was very dynamic and consistently learned from practice and theory. I am proud to have witnessed how she grew and transformed from a confused young person into a strong feminist leader. Maria will certainly be missed!”

The life that Maria led gave clarity to colleagues and friends – especially around issues of sex and sexuality. Kunthea Chan, JASS SEA Program Coordinator, takes away important lessons: “Without Maria Mustika, I could not have well understood the different facets of sexuality and love. She was a good friend, colleague, and sister. A friendly and a thoughtful person; she loved everyone around her.”

Ajeng Herliyanti, one of the younger generation of activists and currently the national coordinator of FAMM, looked to Maria as both a mentor and a friend: “I always saw her as a woman who knew what she was saying. I consider Maria as someone who’s spiritually mature: she turned her suffering to compassion and empathy and turn them into positive energy. I respect her as my guide – the pure voice who’s also a healer, a sign, a manifestation of compassion; a woman who had self-possession.”

Maria also touched the lives of fellow Southeast Asian activists. Jojo Guan of the Philippines remembers Maria fondly: “A helpful friend… a committed activist… a brave woman. Maria, I can reel off a thousand and one descriptions about you. You are a complete woman. And it pains me because the world has lost another wonderful person, another valiant voice for women and for others.”

Many of Maria’s colleagues across JASS globally were also very touched by her, including Natalia Escrucería Price: “I am so sorry for the loss of Maria. She was such an amazing woman and activist—I spent a short time with her in 2012 and immediately felt inspired by her. I hope her family is okay and finds healing in the legacy that Maria has left.”

Carrie Wilson, JASS’ cross-regional program director, had the opportunity to know Maria over the years: “I first met Maria in 2010 in Bandung, Indonesia, where JASS Southeast Asia was hosting a regional training and strategy development process… Luckily, I had the chance to get to know Maria over the next few years during different meetings and trainings – from Bandung to Jakarta to Istanbul to Phnom Penh to Bangkok – and learn what a special soul she was. I was always so inspired to hear about the many things she was doing to support young women and LGBT people who were facing stigma and discrimination in their families and communities. She contributed more to her community in her short life than most people can ever imagine possible. Maria used to say that she felt like JASS was a home for her, but actually, it was Maria who made JASS Southeast Asia, FAMM-Indonesia – and even her own house – a home for so many people, including me, who had the privilege of knowing her and being on the receiving end of her deep, deep love.”

And what JASS Executive Director Lisa VeneKlasen says probably resonates with what all of us family and friends feel about Maria’s passing: “What a terrible loss of such an inspiring, brave activist, and sister. We feel this deeply.”

For all of us who knew Maria, we understand all too well what we need to do next: we have to carry on Maria’s legacy. We have to stay strong and continue to be inspired by her. That’s how Maria would have wanted it to be.