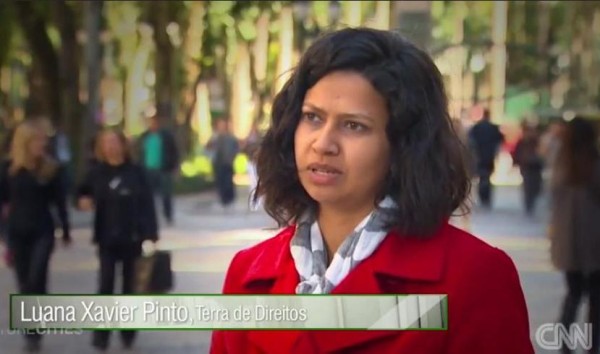 Everywhere at the Human Rights Council (HRC) the catchphrase on everyone’s tongue is “shrinking spaces for civil society”. But what does it mean, really? How are activists grappling with this “shrinking space” in their work? To try and find out a little more, JASS Southern Africa’s Maggie Mapondera interviewed activists from as far afield as Mongolia, Brazil and India to learn from their experiences and analysis.

“[In Brazil] it’s not so much about government censorship,” Luana Coelho of human rights NGO Terra de Direitos which provides legal assistance to social movements and communities, particularly those struggling to access land and rights, cutting across urban and rural movements. “It’s economic censorship. If you don’t pay, you don’t get the news there. It’s very manipulated by capital. We are in a democracy but it’s a direct democracy of the capital, it [is about] following the money.” For Luana, the context throws up challenges and contradictions, with a highly-engaged civil society that strives against deep inequalities, rising conservativism and a lack of political will as well as a high degree of political polarisation in a Brazil that seems to contain multiple “Brazils” within it.

Maggie: If you’re looking at a Brazilian context, what does “shrinking space for civil society” look like for you?

Luana: Formally, we are not facing any kind of attack or even if you say we don’t have a “good environment,” it’s the opposite actually in some ways.What’s going on is Brazilian civil society gained a lot of space with specific mechanisms at local, state and national level to participate in the formation of government policies, through thematic conferences and councils. Everyone in civil society was really involved in this conference process. You need to be a part of the local conference to take part in the state and then nationally—so people are very engaged in policy discussion in Brazil.

The wave of conservative politics worldwide is happening in Brazil. In the last elections we elected the most conservative parliament since 60 years. So the first thing that this congress did was to attack the process of civil society participation through conferences, dismissing it as ‘we want to become communist’. The government is having trouble [holding onto the gains].

Conservatism was always there, in society, but hidden. Why is that? Brazil, as most Latin American countries, has a history of bloody dictatorship. It took more than 20 year and a lot of struggle to build again our democracy under the 1988 Constitution.  Since the re-democratization of the country, some actions or thoughts were almost forbidden, because it would bring back memories of the dictatorship. To give an example, all the debate on sexual and reproductive rights have very little environment to be openly discussed (abortion is a crime in Brazil). The feminists groups were discussing gender equality on political representation and we have had quite a few setbacks in terms of representation in parliament recently, some bad losses for women.

But at the same time, in the 90s, there was what some people would call privatisation of state services where a number of laws made it easier for government to give money to CSOs to run public services. But then this was completely distorted and the last  years many NGOs were attacked or became targeted for getting easy money. In order to improve control over organization, government is debating a new legal framework for NGOs that allows civil society to raise themes for government to finance but this is very idealistic, no? We can work with government in some projects but not in projects where we’re going to question the government’s actions, for example.

Maggie: What does this look for women in particular? Because we know from experience around the world that women are often on the frontline of fundamentalisms that play out on women’s bodies, and restrict women’s choices. How do you see that in your work?

Luana: In general, women are the ones suffering the most with poverty. In my work, most of community leaders I deal with struggling for housing are women. The lack of infrastructure and a gender oriented understanding of the city have negative impacts on how women enjoy rights and/or are subject to violence.

Maggie: You’ve spoken about the privatisation of state services, sustainability and how difficult it is to keep going when there is a lack of resources, can you elaborate?

Luana: Brazil made too much propaganda of how much the country became better, an example of democracy, people improving, and many people out of poverty. Then we come to the sustainability issue – Brazil is the 6th wealthiest country in the world but there is so much inequality. You have this contradiction, you know, it’s not about money or being rich—inequality is so huge that you have many countries within a country, and some areas in Brazil are as poor as the poorest country in the world.  When you look at Brazil and just see the GDP, they don’t see anything.

This privatisation had a direct consequence on NGOs who were depending on international donors, which slowly left the country. If we need to count on individual donation, we do not have the culture for that. People might donate to kids, poor starving children. But can you imagine people donating to the landless movement, which is so stigmatized and criminalized? Someone fighting for land? So the reality we see a lot is if we lose international donors, the challenge of sustainability and independence of CSOs is on the table.

Because we are facing this challenge now, our biggest sponsor is putting the question of whether to keep supporting or not, you look at the experiences in a strategic way. What bridges can we make that we can survive? We do need money to survive.

Maggie: What about strategies? What is needed or what is possible to navigate the context?

Luana: It’s interesting to see things from outside. Because here at the HRC, Brazil is in a position where it wants to be seen as the leading country on human rights of the global south. So this makes some things very complicated. If we as civil society want to point out issues, then we hear in this space that Brazil is a leading country on that!

I think what is good for us is we don’t have a good environment at home to bring some topics related to HRDs, for instance, sometimes it’s good to come here internationally to make it visible there. So you kind of take the tension that is so polarised, to be able to bring some topics from outside that we cannot talk about at home. But even so, it is hard because the UN system is slow and we deal with people’s lives every single day.