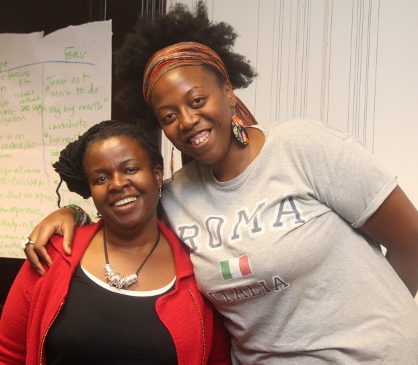 In recent weeks, much global activism has focused on action towards justice for the over 200 Nigerian schoolgirls abducted by Boko Haram in April this year.

Under the broad banner of ‘Bring Back Our Girls’, activism has ranged from vigils to marches to engagement with Nigerian diplomatic missions and establishments, for those outside of Nigeria. The most visible face of the campaign, however, remains #BringBackOurGirls, the hashtag that gained purchase with many social media users demanding the safe return of the girls to their families.

In February, over 2 500 Zimbabwean families were displaced when the walls of Tokwe Mukosi Dam collapsed, causing flooding which is said to have affected tens of thousands of people, many of whom have been relocated to a relief camp in Chingwizi in Zimbabwe’s Mwenezi district.

In the same time that #BringBackOutGirls has reached peak exposure here in Zimbabwe and globally, stories have emerged of girls and women in the Chingwizi camp resorting to using leaves for their menstruation, as well as many other harrowing stories with the winter months steadily approaching, and relief support steadily diminishing.

It has been over three months since the catastrophe and with Zimbabwean (female) activists recently dedicating much energy and effort to #BringBackOurGirls, a quite audible critique has emerged from male commentators.

“Why are you focusing on the Nigerian girls’ plight when you have your own people here in Zimbabwe suffering?” goes the rationale.

The mantra behind all the criticism, of course, is that charity should begin at home, and that activism that first looks ‘outwards’ before assessing the local situation reeks of superficiality and opportunism.

Additionally, these current critiques beg the question of what effective activism really is. It might seem from the outside looking in that in order to be ‘effective’, activism has to take on an increasingly public and instantaneous face.  With the many tools at our fingertips – from the share/ post/ like buttons that immediately allow us to give real-time visibility to our activism and the  smartphones that allow us to take solidarity selfies – it is fast becoming a reality that one’s activism doesn’t much count if it’s not all over Facebook or Twitter.

At the same time, we must not dismiss the fact that for one’s activism to reach the fever pitch that is dangerously and erroneously becoming synonymous with ‘success’, it must reach a critical mass that includes the ‘right people’. Here we must pause to think of the influence that the likes of Michelle Obama, Malala Yousafzai, Alicia Keys and P Diddy have had to increase validity of the #BringBackOurGirls campaign among many who might not otherwise have taken much notice of Nigerians’ calls for justice and action.

So could a Zimbabwean campaign for the victims of Tokwe Mukosi be as effective internationally, even locally? Given that Zimbabwe is no longer the hot spot for bad news it once was (of course, bad news still happens, but it is no longer on the instantly visible and almost universal scale of the mid-2000s), and given the state’s continuously articulated distance from the western geopolitical space (the “keep your England and I will keep my Zimbabwe” rhetoric), it seems we might have a tougher time of it.

Bear in mind, too, that there has since been debate and controversy around who actually first brought this hashtag to Twitter; and that there has been public dispute around whose intellectual property it is, and if and how the hashtag changes the situation for the girls. Another thing to remember is that with a population of over 160 million people, Nigeria is over ten times the size of Zimbabwe. What does this mean in terms of Internet and social media users and the differences in reach and visibility? And with increasing global attention on militant Islamist groups, Boko Haram commands more audience than any current issue in Zimbabwe might. These are simple facts.

If I understand it correctly, however, the point being made by critics of Zimbabwean women’s involvement in #BringBackOurGirls is that because there is an absence of overt visibility for what Zimbabwean women might be doing – no selfies, no banners, hashtags and public marches – there is therefore nothing at all being done.

Furthermore, one gets the toe-curling sense that if an issue affects women, it is only women who must act on behalf of the cause. I have been wondering to myself why these concerned male critics haven’t felt an urge to initiate campaigns for resource mobilisation for Chingiwzi rather than sit smugly in their seats and point fingers. Having and not having a vagina does not, and should not, create a ‘them versus us’ scenario; women’s issues are human issues!

Women are not machines.

Women do not come with the capacity to deal with every social issue that affects womankind. To put our collective efforts towards working to a better future for women and girls on trial is both infantilising and non-progressive; for isn’t the ability to choose where and how we invest our time and efforts in the onward struggle one of the freedoms we demand for women?

Women’s movements are made of women with identities; identities that are in flux, in tension, in contradiction and yet few are willing to talk about these issues  in the mainstream context of Zimbabwe’s women’s organising. Instead, by virtue of one’s being a woman (in this description, possessing a vagina and attendant hormones associated with femininity), one must seemingly feel in equal measure the plight of every woman, every issue that afflicts every woman, attend every march, sign every pledge and stand in solidarity with every cause.

If we are to build authentic movements, we must allow women the choice to fit into efforts as, when, and where they see fit. Knee-jerk responses to issues, where the concern may be for visibility over substantive change, only serve to stereotype our efforts as reactionary and superficial, something the women’s movement is already struggling with. At the same time, men need to understand that they are part of the ‘we’, the allies that are needed to push efforts ahead, as better outcomes for women mean better outcomes for the entirety of society.

This blog was written by journalist-activist, Fungai Machirori founder of Her Zimbabwe.