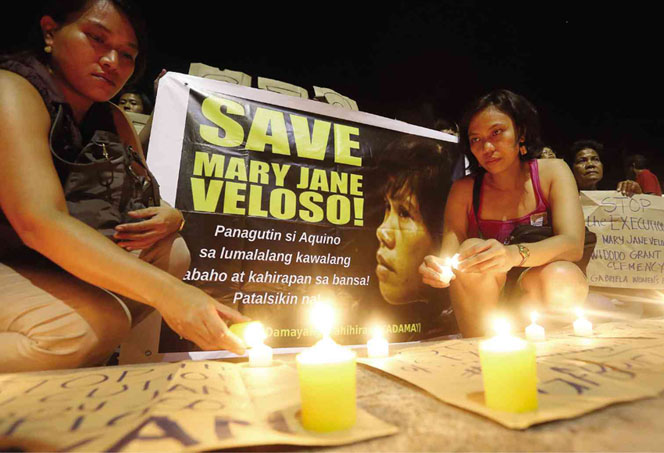 It’s a little past two o’clock in the morning and yet everyone was still awake. On the street fronting the Indonesian embassy in Manila, most of the activists and supporters of Filipina human trafficking victim Mary Jane Veloso laid on the ground half-hoping and half-dreading the announcement regarding the execution. They held a vigil for Mary Jane, on death row in Indonesia, scheduled to be put on firing squad in Nusa Kambangan, Indonesia’s prison island in Cilacap, Central Java, at approximately 12 midnight Indonesia time, which is around one o’clock AM Philippine time on the 29th of April. As legal and diplomatic options have been exhausted, the power of the people’s united action is the only thing left to stop Mary Jane’s execution.

Who is Mary Jane?

Mary Jane Veloso was born to a poor family in Cabanatuan, Nueva Ecija. Her father used to be a farm worker at the Hacienda Luisita in Tarlac and did a dozen of other odd jobs – including picking garbage and selling recyclable items from trash – to make ends meet. Because of poverty, Mary Jane was unable to finish school. She had to help her parents earn a living. Eventually, as a single mother of two sons aged 6 and 12 – she had to find work abroad to feed her children as jobs were scarce in the Philippines. She worked as a domestic helper in Dubai, United Arab Emirates for a time but was nearly raped by her employer so she decided to work elsewhere.

That’s when she decided to fly to Indonesia because a family friend had promised her a job as a maid. Unfortunately, this family friend, a woman working with an international crime gang, had secretly placed heroin in a suitcase she was carrying.

In April 2010, Mary Jane was arrested in Yogyakarta airport as an Indonesian court found her guilty of attempting to smuggle 5.7lb of heroin. She was given the death penalty in October 2010 but was temporarily spared due to a moratorium on capital punishment enacted by then Indonesian President Susilo Bambang Yudhoyono. She was again scheduled to be executed this year as the moratorium was lifted under the current Indonesian President Joko Widodo. On April 25, 2015, the notice of execution for Mary Jane, along with eight other death convicts, was served.

In a country where a tenth of the population are migrant workers – who are deemed as “modern day heroes and heroines” for fuelling the economy through dollar remittances – Mary Jane Veloso’s case touched a nerve in Filipinos’ hearts.

It was unimaginable how Mary Jane and her family felt on the three days after the execution notice was served. A rollercoaster ride of emotions was the closest description to what most people felt – Mary Jane, her family and supporters, especially – in what could be considered the longest 72 hours of their lives.

On that fateful early morning of April 29, Veloso’s execution was postponed at the last minute. The other eight prisoners scheduled for execution alongside her were executed by firing squad.

The Power of Movements

Weeks and days before the execution date, Philippine migrant rights group Migrante International together with other grassroots organizations held protests and vigils in front of the Indonesian embassy in Manila. JASS Southeast Asia and JASS’ 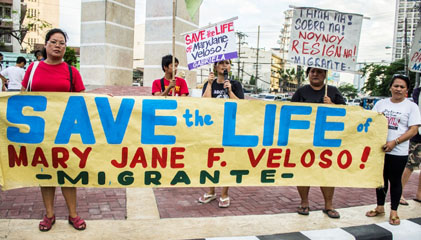 partners in the Philippines such as GABRIELA, Samahan ng Maralitang Kababaihang Nagkakaisa (SAMAKANA or Organization of United Urban Poor Women) and Center for Women’s Resources (CWR) took part in these mass actions.

And in an emergency meeting on the afternoon of April 28, President Joko Widodo met with migrant and justice groups of Indonesia. Anis Hidayah, executive director of Migrant Care Indonesia recalled how she discussed the details of the case and appealed to the Indonesian president to spare the Filipina’s life. “I told the President that [Indonesian] migrant workers on death row overseas are in the same position like Mary Jane, they are all victims. As I spoke, I couldn’t help crying,”Hidayah said.

Online, support for the #SaveMaryJane call was also gaining ground in the Internet, according to petition platform Change.org. The petition is now considered as the fastest growing plea on Change.org – Philippines. It reached the Indonesian State Palace through social media and through Indonesian human rights groups. As of April 28, more than 200,000 signatures from 127 countries were collected that helped spare the life of Mary Jane. The hashtags #SaveMaryJane, #StoptheExecution, #FreeMaryJane, and #SaveMaryJaneVeloso, became viral on social media. #SaveMaryJane was the top hashtag in the Philippines on April 28.

Three days before the execution date, JASS Southeast Asia, along with its partner organizations and network in Indonesia and Cambodia, initiated a candle-lighting and social media campaign. JASS women held candles and/or lighted candles in front of their houses to call for Mary Jane’s reprieve, took pictures, and posted on JASS Southeast Asia’s Facebook page. 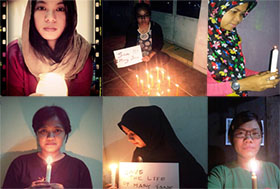 Young women’s organizations of Southeast Asia that JASS helped to build and continuously supports – such as Cambodian Young Women’s Empowerment Network (CYWEN) and Forum Aktivis Perempuan Muda-Indonesia (FAMM-Indonesia) – spearheaded parallel initiatives to save the life of Mary Jane Veloso. CYWEN delivered a petition letter asking for a stay of execution for Mary Jane on April 25 at the Indonesian embassy in Phnom Penh, Cambodia. FAMM-Indonesia led an SMS (short messaging service) campaign among their members and networks urging them to participate in JASS’ social media campaign and sign the online petition on Change.org. In Amsterdam, Netherlands for its senior management and directors’ meeting in April, JASS expressed support for the Philippines in calling for reprieve for Mary Jane.

As Mary Jane Veloso’s execution is only delayed, not cancelled, renewed calls to save Mary Jane’s life persist. What Mary Jane’s continuing story has proven is that strong social movements – in this particular case – in the Philippines and Indonesia – can definitely put pressure on governments to make them heed and take action on disadvantaged people’s plight.

Two months after the temporary stay of execution was announced, efforts continue to call on the Indonesian government to grant Mary Jane a permanent reprieve. In the Philippines, justice groups form alliances such as the Save Mary Jane Alliance, migrant rights groups hold discussions in communities about Mary Jane and the labor export policy, and the online petition continues to grow.